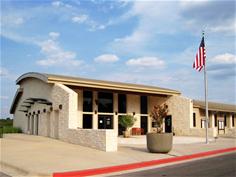 The original Lakeway City Hall was built in 1982 and went through a major renovation in 1995. In 2005, a new and larger City Hall was built at the intersection of Sailmaster and Lohmans Crossing Road. City Hall is home to several departments including Building & Development Services, Finance, and Administration, which includes the offices of the Mayor, City Manager, and City Secretary.

All City Council meetings, committee meetings, board meetings and commission meetings are held within the Council Chambers.

The original City Hall is now home to the Municipal Court.